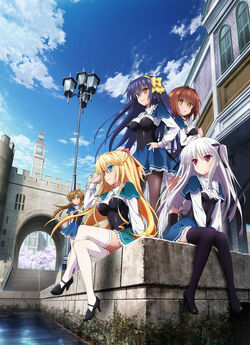 Absolute Duo  (アブソリュート・デュオ Abusoryūto Dyuo) is the animated version of the light novel. The anime was announced at the MF Bunko Summer School Festival 2014 on July 20, 2014.

The series is directed by Atsushi Nakayama, written by Takamitsu Kōno and the music's played by Atsushi Hirasawa. The winter anime is being released by Media Factory's 8-Bit studio. The release date of the first episode was on January 4, 2015, and ran until March 22, 2015.

Absolute Duo follows the viewpoint of its main male protagonist, Tor, as he enrolls in Koryo Academy, a high school for artificially created beings called Exceed. While they are in essence human, they are physically stronger, faster, and have the ability to manifest their souls as weapons. These soul weapons are known as Blaze (焔牙/ブレイズ Bureizu?), and at Koryo Academy, the students battle, train, and study to become future peacekeepers. Immediately after arriving, during the qualification ceremony, the students are suddenly ordered to battle the person next to them, with their enrollment on the line. This requires them to use their Blazes. While most manifest as melee weapons, such as swords, Tor's soul manifests as a shield, giving him the title of Irregular (イレギュラー iregyurā?). After winning his match at the qualification ceremony, and therefore being forced to say goodbye to his new friend, Imari Nagakawa, Tor learns that Koryo uses a special "Duo" system, With this system in place, students are assigned partners with whom they do just about everything. Lo and behold, Tor is paired with Julie Sigtuna, a silver-haired, red eyed girl from Scandinavia, and our main female protagonist, which immediately brings even more attention to Tor than his title of Irregular already did. Tor and Julie must share a room, sit next to one another in classes, and fight together, per the Duo system's behest.[1] With their time together, Julie and Tor learn that both of them are training at Koryo in pursuit of strength, so that they can take revenge for the murder of their loved ones. They give one another the title of Avengers, and grow a little bit closer from the knowledge. Julie also reveals herself to be an El-Awake, and in possession of unlimited potential power. It is explained that an Exceed is a type of El-Awake, but Exceed are created artificially, while El-Awakes like Julie became one through raw emotion. The stage is set completely to create a vast difference between Tor and his classmates. Then again, as with most stories, that's nowhere near the end of it.

Tor, due to his many situations, is faced with the difficulty of getting along with his other classmates, but along the path of scorn, he does make some powerful friends. Tomoe Tachibana, Miyabi Hotaka, Aoi Torasaki and Tatu who are students that also passed the qualification ceremony, the young principal, Sakuya Tsukumo, an energetic teacher, Rito Tsukimi, and Lilith Bristol, a transfer student. Lilith is very impulsive, and has a large amount of influence over the school system. So, when she hears about Tor and his shield, she transfers from the English Branch of Koryo Academy in order to pair up with Tor. Tor, having already formed a deep friendship with Julie, denies her proposal. When a battle tournament comes up for the school, Lilith, in a burst of anger, challenges the whole school to defeat her. Eventually, Tor, Julie, and their team take her down. Nevertheless, Lilith still not give up and try to win Tor's heart. Tor spends his school life with all his classmates and teachers, such as attending lessons, having tea with Lilith and strolling out in shopping malls once in a while. Tor also get along with a beauty named Silent Diva and Sarah, Lilith's butler as well.

Tor's school life used to be all-normal until one day Equipment Smith and K interrupts the normal school lives of the Koryo Academy students because they have the same goal that is, to build a strong force that conquers the world with their co-produced Units. Equipment Smith is revealed to have deep vengeance towards Sakuya's family for exceeding his research and Lilith's family for abandoned him to search for another career. When the academy held a summer trip at the island where located one of Koryo academy's branch school, they sent rebellious forces to attack the students and kidnapped Miyabi, who feels depressed because she is weak to help her friends and wish for greater power. Days later, the forces infiltrated the school compound led by K, Equipment Smith and followed by Miyabi, who is made their slave because of her wish. Tor and his friends united their power defeated K, Tomoe put Miyabi back to normal and all K's force units are defeated by all the academy's students. Due to K's defeat, Equipment Smith insulted K ,thus makes K killed the former. The same night, K continued attacking the school the second time all by himself but was later defeated again by Tor and Julie, thus apprehended. The remaining thing unknown is that the enemy, who killed Tor's sister and Julie's father is quietly moving behind the scenes.

Community content is available under CC-BY-SA unless otherwise noted.
Advertisement